What is DNP3? DNP3, or DNP 3.0, is a communications protocol used in SCADA and remote monitoring systems. It is widely used because it is an open standard protocol. This means that any manufacturer can develop DNP3 equipment that is compatible with other DNP3 equipment.

How to Deploy DNP3

Distributed Network Protocol (DNP or DNP3) has achieved a large-scale acceptance since its introduction in 1993. This protocol is an immediately deployable solution for monitoring remote sites because it was developed for communication of critical infrastructure status, allowing for reliable remote control.

GE-Harris Canada (formerly Westronic, Inc.) is generally credited with the seminal work on the protocol. This protocol is, however, currently implemented by an extensive range of manufacturers in a variety of industrial applications, such as electric utilities.

DNP3 is composed of three layers of the OSI seven-layer functions model. These layers are application layer, data link layer, and transport layer. Also, DNP3 can be transmitted over a serial bus connection or over a TCP/IP network.

The DNP3 Protocol Specification is Based An Object Model

DNP3 is based on an object model. This model reduces the bit mapping of data that is traditionally required by other less object-oriented protocols. It also reduces the wide disparity of status monitoring and control paradigms generally found in protocols that provide virtually no pre-defined objects.

Purists of these alternate protocols would insist that any required object can be 'built' from existing objects. Having some pre-defined objects though makes DNP3 a somewhat more comfortable design and deployment framework for SCADA engineers and technicians.

The master and remote both use a library of common objects to exchange information. The DNP3 protocol contains carefully designed capabilities. These capabilities enable it to be used reliably even over media that may be subject to noisy interference.

The DNP3 protocol is a polled protocol. When the master station connects to a remote, an integrity poll is performed. Integrity polls are important for DNP3 addressing. This is because they return all buffered values for a data point and include the current value of the point as well.

As an intelligent and robust SCADA protocol, DNP3 gives you many capabilities. Some of them are:

Get the DNP3 White Paper

An introduction to DNP3 from your own perspective. 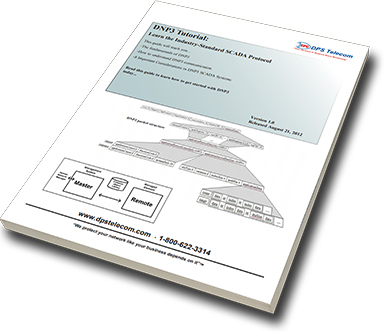