(NOTE: The term "temperature monitor" can have different meanings in a Telecom and IT Remote Alarm Monitoring and Control context. It can be a simple hardware temperature sensor or it can be a Remote Telemetry Unit (RTU) that collects data from many temperature sensors. Some concepts in this article will apply to both, while others may be more relevant to one or the other.)

A temperature monitor is not overly complex, but it is one of the most important investments you can make toward the reliability and uptime of your telecom or IT system.

Unfortunately, a temperature monitor is not generally respected by the technicians responsible for keeping the network online. They are generally more interested in technical system alarms than this simple environmental monitoring device. Heat is obviously a problem whenever you're dealing with computer equipment, but the very low temperatures of harsh winters can also cause remote site equipment to fail. 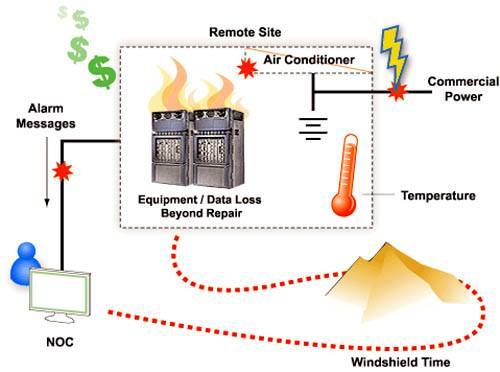 In this diagram, an HVAC (air conditioning) failure occurred without knowledge of the network operators. No temperature monitor was in place to detect and report the high temperature, so equipment damage and data loss will result in expenses that could have purchased literally thousands of temperature monitoring devices.

Telecom hardware and devices, because they involve large amounts of electricity, create great quantities of thermal energy (heat). Therefore, high temperature represents a continuous threat that must be monitored with a temperature monitor device. Otherwise, a heat spike will stop your revenue-generating network in its tracks.

Don't forget, however, that cold temperatures can cause havoc in non-equatorial climates as well. Although computer equipment tends to appreciate a cool climate, 50 degrees below zero stops pretty much anything in its tracks.

If you can't protect your servers from high or low temperature, neither your boss nor your clients will be very happy about it. After all, why wouldn't you spend the relatively modest amount necessary to install a good temperature monitor within your server room, server closet, datacenter, or telecom site?

To properly monitor your site temperature, you need a temperature monitor that measures temperature within about a single degree against multiple threshold levels. At least two are necessary to detect the"too low" and "too high" levels, but additional thresholds can make it easier to understand what's really happening at your sites. For example, it can be useful to have a "yellow alert" level so that you know the temperature is starting to rise. It's even more important, however, to have a "red alert" level to tell you the temperature has reached an absolutely critical point that requires immediate intervention to prevent thermal shutdown and expensive equipment damage.

But knowing the interior temperature at your site doesn't tell you everything. From the heat of the summer to the chill of the winter, it's also an excellent idea to monitor the exterior temperature. This way, you're able to assess the true danger of an HVAC or heater failure. While any climate control fail is an urgent scenario, the difference between an air conditioner failure that occurs when the temperature outside is 50 degrees Fahrenheit and one that occurs in the temperature outside is 110 degrees Fahrenheit.

As simple as temperature monitor technology is, it's not as if there's only one kind of sensor. In fact, there are two major types of temperature sensors: analog and discrete. What's the difference? Imagine that you need to monitor the temperature in your home (and you're not physically there to feel the temperature). With a thermometer, you would know the exact temperature (within a degree or so, depending on the accuracy of the thermometer you choose).

Imagine now that you can only listen to whether or not your heater or air conditioning is running, and that you can tell the difference between the two devices. In this case, you would know that the temperature in your home fell into one of three ranges: absolute zero to the point where the thermostat turns your heater off, the temperature range you specified as ideal, and somewhere between your AC activation temperature and the surface of the sun. As you can see, a discrete temperature monitor gives you much less detail than an analog one does. Even so, discrete is far better than nothing and can be significantly cheaper than an analog temperature monitor.

Now, my little scenario in the last paragraph hinted at a potential advantage for a discrete sensor over an analog: your thermostat is programmed automatic reaction temperatures where the heating or cooling is activated. In telecom network or IT terms, this translates into an automatic alarm from your temperature monitor, perhaps coupled with an automatic response in climate control.

Analogs are also able to track and measure the change in temperature over time. This allows you to know that the temperature is "dropping slowly" versus "plummeting like a rock".

As you shop for a temperature monitor, keep in mind that you may want to monitor temperature in many locations throughout a site. This is especially true for larger sites, where many different pieces of equipment will create "thermal zones" that should be monitored independently by dedicated temperature monitors.

While your costs will increase somewhat as you deploy multiple temperature monitors at each site, this investment can pay off big time. Many companies have been known to lose collective millions of dollars in equipment because they failed to monitor temperature adequately. In this game of temperature monitoring, more intelligence yields better financial results.

Also keep in mind that intelligence alone can't protect your equipment. If you know everything but can do nothing, you are getting nowhere fast. Intelligence combined with the power to react is what yields success. As an example, imagine that your revenue-generating equipment has a backup power supply but your air conditioning does not. If the power fails, you'll be helpless to keep service online because, although your servers have electricity, they will quickly reach the point of thermal shutdown without proper air-conditioning. Although your temperature monitors will, in this case, faithfully report the rising temperature at your sides, you will be powerless to stop it without shutting down service.

DPS Telecom clients have frequently found that installing temperature monitors at remote sites is an effective way to protect the equipment there.

One key piece of equipment that benefits greatly from temperature monitoring is your site's backup batteries. Chemical-based batteries require an ideal temperature range to run best. Deviations from this ideal range can cause drastically reduced run-time and multiply the number of times you'll need to replace batteries completely.

Data closets are also prime targets for installing temperature monitors. Servers generate a lot of heat, so it's important to monitor how well your cooling efforts are working 24 hours a day. In fact, one client sent an e-mail to DPS with the following message:

"I need to know how to install a temperature monitor in my server closet. The AC has not been functioning properly in the last several months. I can't explain why it doesn't work, but we continue to have problems. I had another problem just three days ago. I need a temperature monitor that will send a message to my cell phone when the temperature rises too high."

DPS also has users in northern Canada that use NetGuardian remotes with built-in temperature monitors and external temperature monitor probes to make sure that the temperature at the site doesn't drop too low. As I described previously, the extreme cold of northern winters can cause big problems with equipment, just like heat can.

Temperature monitors have also been used by DPS clients to support environmental efforts. Turning off AC units when the site temperature is at the upper end of acceptable levels minimizes power consumption, but protecting the world environment and reducing energy costs for that client's company.

DPS has worked with a telco in Canada to send temperature alarm messages from remote sites via a T1. Each RTU uses only a single DS0, so a sizeable fleet of RTUs is able to report back to the central master using just that single T1.

In a much smaller application, another DPS client on the East Coast used a dial-out RTU as a stand-alone temperature monitoring tool to send alert messages to technician's cell phones. Originally, this client deployed a very small RTU supporting just two 2 numbers. Later, he upgraded to a medium-size RTU supporting up to 8 phone numbers.

DPS also has a railway client that uses RTUs as remote monitoring tools within their signaling division. While a normally built RTU was acceptable on the telco side of this company, a wide-temperature-range remote (built with higher-tolerance parts to sustain hotter and colder temperatures) was required to withstand the temperature swing in non-hardened signaling enclosures alongside railroad tracks. Whenever small remote cabinets and huts are used to contain telecom gear (including tools for remote monitoring), all of that gear must be able to handle the hottest heat and/or the coldest cold that the local climate generates throughout the year.